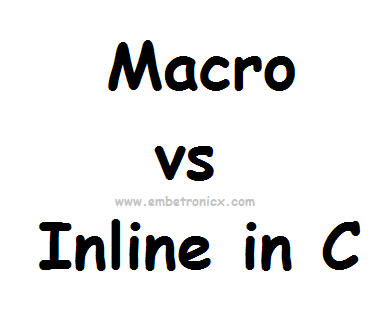 In this tutorial, we are going to see Macro vs Inline function in C programming.

You can also read, Embedded interview topics, container_of macro in c, stringizing, and token pasting operator in C, and pointers in C.

Many C and C++ programming beginners tend to confuse between the concept of macros and Inline functions. Often the difference between the two is also asked in C interviews.

The Concept of C Macros

Macros are generally used to define constant values that are being used repeatedly in programs. Macros can even accept arguments and such macros are known as function-like macros. It can be useful if tokens are concatenated into code to simplify some complex declarations. Macros provide text replacement functionality at pre-processing time by the preprocessor.

Now let’s see an example through which we will confirm that macros are replaced by their values at pre-processing time.

Here is a C program :

Now let’s compile it with the flag -save-temps so that pre-processing output (a file with an extension .i ) is produced along with the final executable using the below command.

The command above will produce all the intermediate files in the GCC compilation process. One of these files will be macro.i. This is the file of our interest. If you open this file and get to the bottom of this file :

So, you see that the macro MAX_SIZE was replaced with its value (10) in preprocessing stage of the compilation process.

Macros are handled by the pre-compiler and are thus guaranteed to be inlined. Macros are used for short operations and it avoids function call overhead. It can be used if any short operation is being done in the program repeatedly. Function-like macros are very beneficial when the same block of code needs to be executed multiple times.

Here are some examples that define macros for swapping numbers, square of numbers, logging function, etc.

Now, we will understand the below program which uses a macro to define the logging function. It allows a variable argument list and displays arguments on standard output as per the format specified.

Here is the output:

Here is the syntax :

Here, we will understand the above features of macro through the program that is given below.

The Concept of C Inline Functions

It is a common misconception that inlining always equals faster code. If there are many lines in the inline function or there are more function calls, then inlining can cause wastage of space.