This is the series on Unit testing in C for embedded development. The aim of this series is to provide easy and practical examples that anyone can understand. This is the Unit Testing in C – Testing with Unity tutorial. Let’s get started.

I would recommend you to explore the relevant topics by using the below link.

In this tutorial, we are going to discuss –

Before doing anything, we have to know about the unity.

Unity is simply a rich collection of assertions you can use to establish whether your source code behaves the way you think it does. Unity provides a framework to easily organize and execute those assertions in test code separate from your source code. There are many TEST_ASSERT functions are available in the Unity framework, which is used to validate the values. We will see one by one.

These are the functions used to validate the boolean condition.

Separate set of functions are available for signed, unsigned integers that too for all sizes. Please have a look at below functions.

These are the functions used to validate the unsigned hex values.

These are the functions used to validate the bits in the value.

These are the functions used to validate the strings and pointers values.

Note : You have to know the structure padding. I will always fail if structure is padded by 0.

If you add _MESSAGE to the names of any assertion listed above for the message variant (and include your own string as the final parameter in the assertion). The message variant of TEST_ASSERT_EQUAL_INT is given below. That message will be printed when it is failing.

Like this you can add the _MESSAGE to any functions.

If you want to ignore the test case then you have to use this function.

This will not run the respected test case and ignore it.

If you want to fail the test case you can use the below function.

Functions are available for float and double also. Out of this, I think, I’ve covered most of the functions which we use widely. If I’ve missed anything please find that in ThrowTheSwitch.

Now we will move to the example project.

Now I am going to create a new project which has no source code initially. In this project ceedling will be linked automatically since we are creating the project using ceedling.

After this, you can able to see the prints like below.

Cool. Now you have created the new project using ceedling.

Requirement for the development

First we will get a requirement. Need to develop the function like mentioned below.

Got your requirement? Ok, let’s write the code now. Oops, wait a minute. This is TDD. Before writing the code, we need to have a test plan and test code. Let’s plan how we are going to test.

Let’s create a test plan based on the requirement above.

Here we are not going to write the complex program. We will go step by step. So let’s write the code for bit manipulation. To create source code, we need .c and .h files. Using ceedling also we can create the source template. We can create a module using ceedling module:create[module_name].

First go into the project directory where project.yml file stays. Then enter the command to create the module.

After this, you can see the prints like below.

Three files have been created automatically while creating module. Now we can use those files to add our source code.

NOTE: In this tutorial, we are not going to compile the program or test the output of the program. Out intention is to write the unit test for out source code.

I am going to write the source code for above requirement. Please find the code below.

All good? I have written one function called do_bit_man. This is one unit of the source code. So we are going to test that function.

Testing those functions with Unity

We are going to write out own test case. So we can remove the function called test_bit_manipulation_NeedToImplement.

What is setUp function?

This is kinda start function which is used to initialize some variables. This setUp function is executed before each test function is run. If you
have three test functions in your test file, setUp gets called three times.

What is tearDown function?

Note: You have to include the unity.h file in every test file. And include your require header files also.

Let’s write our first test case to test the function do_bit_man(uint8_t position). So I am going to create the test function called test_do_bit_man_0(void).This function name can be anything but make sure you are adding test_ in front of that function name. This test case is negative test. When I pass more than 7, it should return -1 and it should not modify the any values of those global variables. Please find the below function.

To verify this, you can run ceedling test:all. Make sure that you are running the command terminal on the directory where the project.yml file is present. When you run this, you will get prints like below.

Our test case has passed. It is not modifying any of the variable and returns -1.

Another negative test case we have to do. When I pass negative value (less than 0), that time also it should behave as test case 0. Write our second test case.

If we pass the valid argument ( 0 to 7), then it should set, clear and toggle the respective variables in the position of argument and it should return 0.

These are the possible test cases that we can write. Please see the complete test code below.

If you want to see the code coverage, please follow the below steps.

You can see the prints like below if you have installed correctly.

Then have to add gcov plugin using project.yml. Open the project.yml and add - gove after plugin like below.

That’s it. Now you can see the report by using ceedling gcov:all. You will get details like below.

If you want to generate detailed html review, then please use the below command after ceedling gcov:all.

Once it is generated, then you can see the html file in simple_prog\build\artifacts\gcov. Open those two files which is generated and analyse. Right now it is 100%. That means we have covered all the lines and branches. You will get report like this. 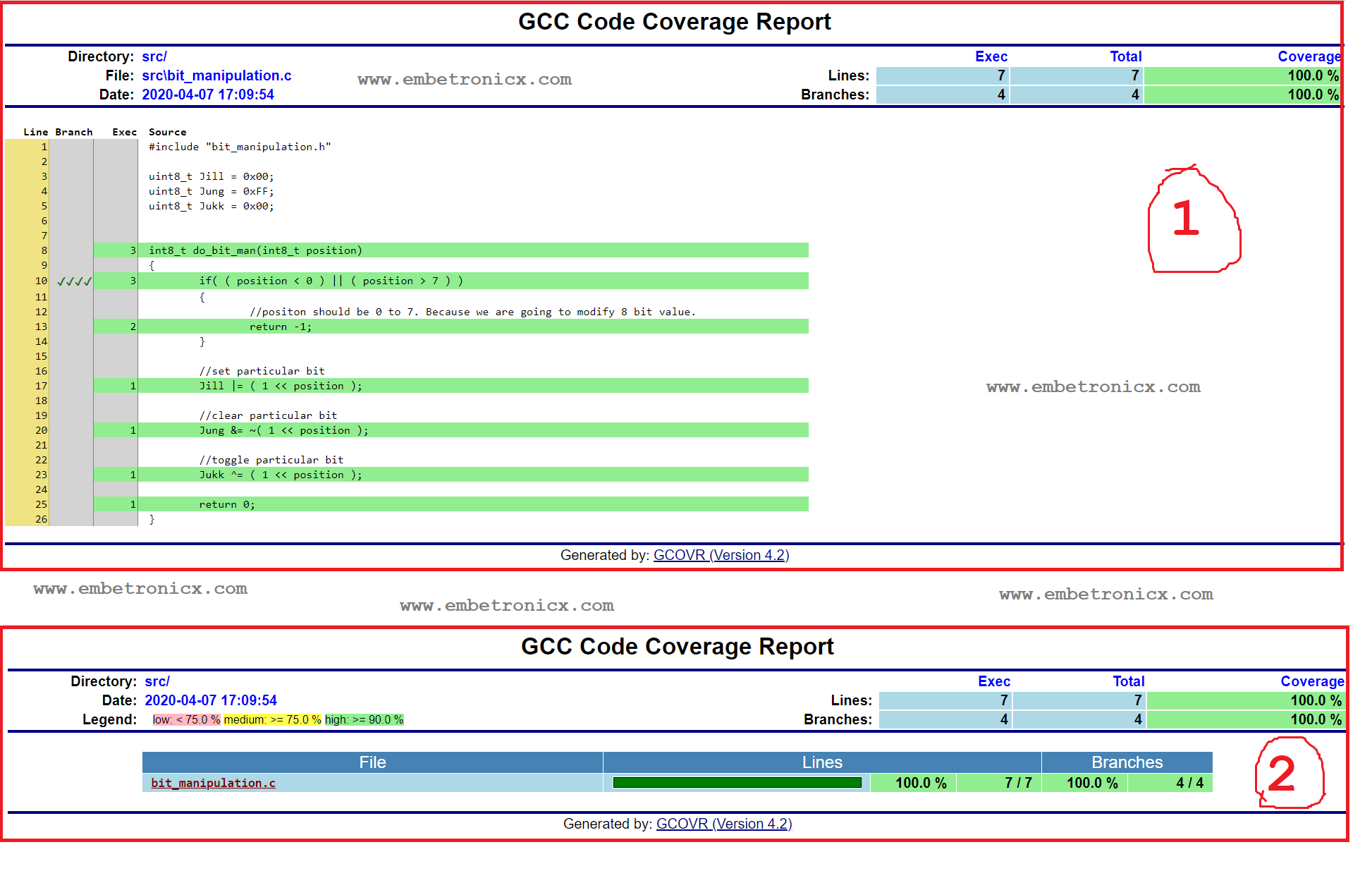 I want you guys to experiment on those by removing any of the test case and regenerate the report. Now you may see some percentage drop. Like this you can learn about code coverage.

Whenever you regenerate the report please clean it and regenerate or follow the steps below to get the updated report.

By this experiment you can see how many branches we have and how many lines we have covered etc. You may get report like below if you remove test case 2. 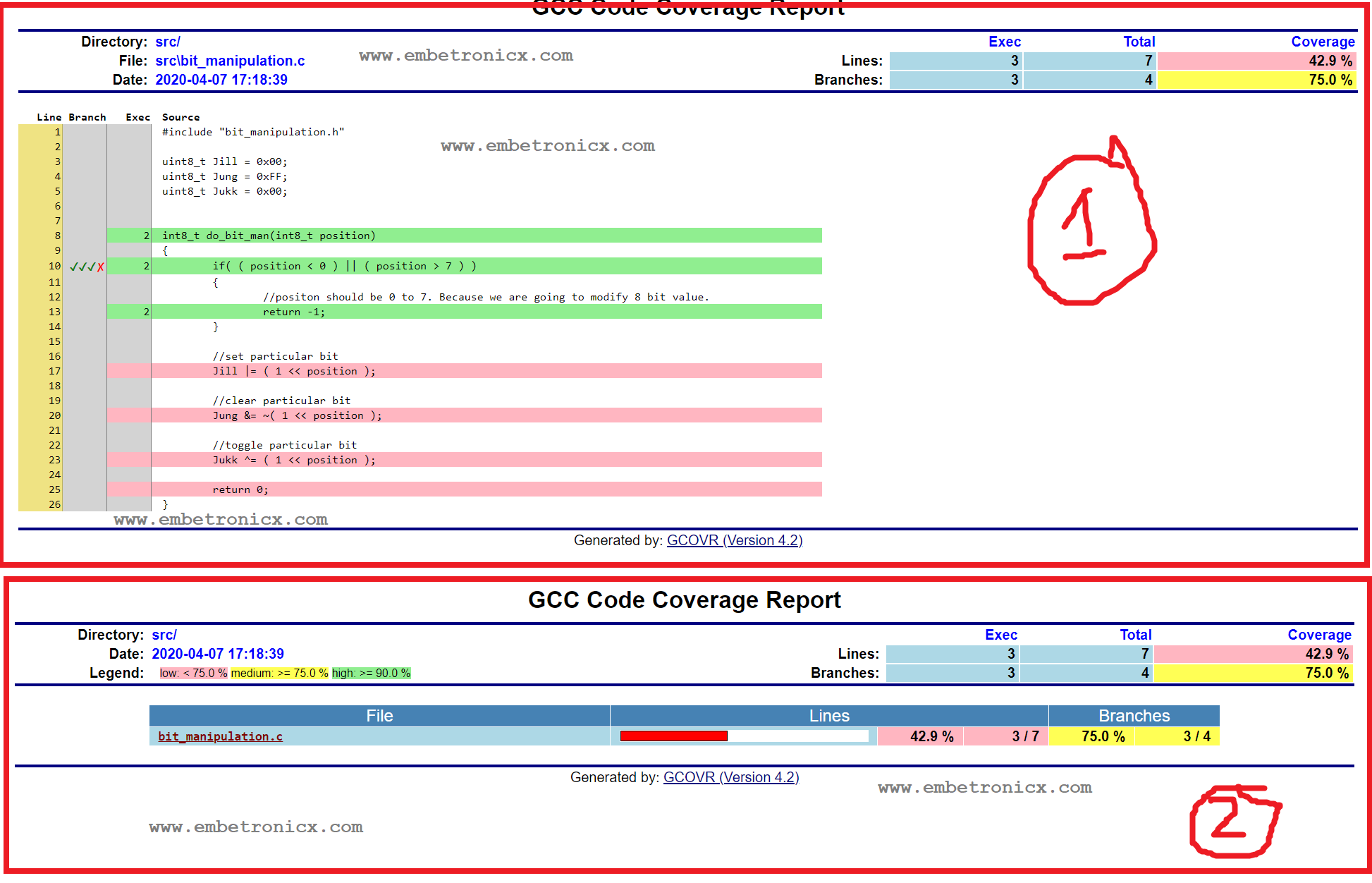